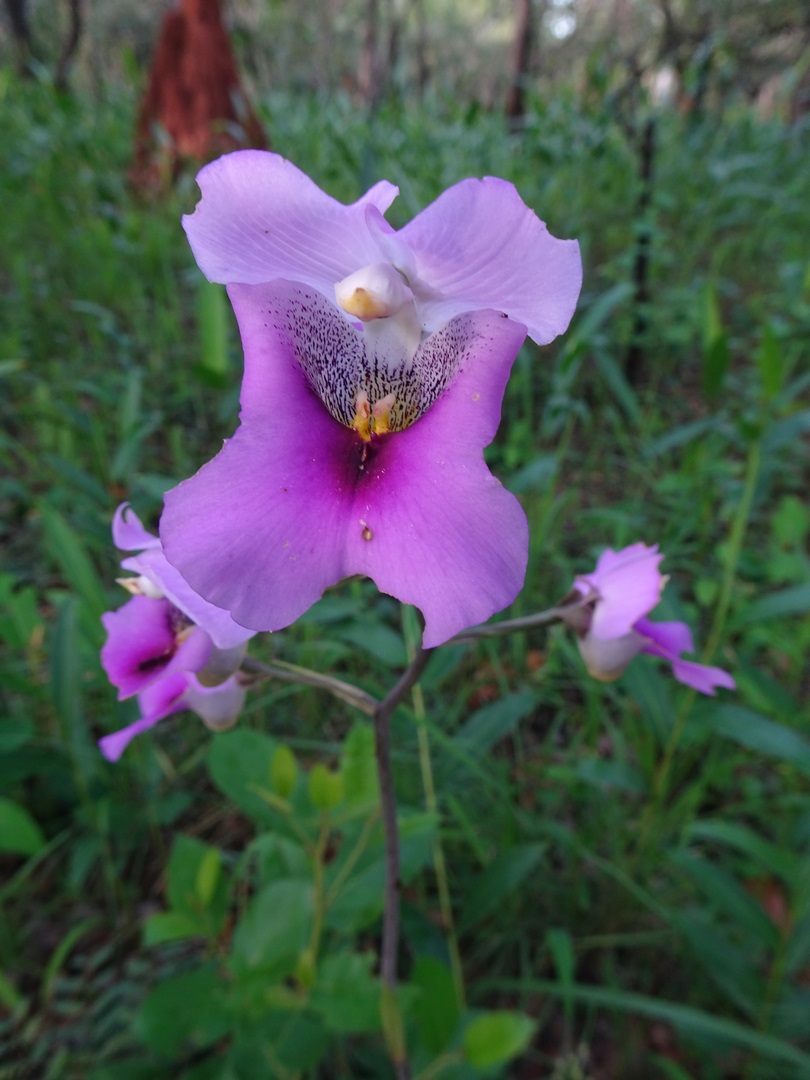 The season of Baptisms and Sacraments begins, at least for me.

The path to becoming a Christian is the fruit of an encounter. The encounter is with God and Jesus Christ. Becoming a Christian is not (only) living according to certain rules. It is not even (only) believing in God. Nor is it (only) loving others. Giacomo Biffi, great bishop of Bologna, wrote that "even before a religion, a morality, a cult, a philosophy, it is an EVENT: the event of the Resurrection of Jesus of Nazareth, which marks the beginning of the renewal of the people. Therefore it is timeless: unlike doctrines which are born, make a fortune, enchant for decades- perhaps for centuries, then they decay and die, while Christianity remains, precisely because it is a fact ”.

Here in Central Africa the path to receiving Baptism is quite long. Typically, it's 3 or 4 years of preparation. Preparation entrusted to the catechists, who in the villages are the heart of the Christian community.

After Confirmations, we now prepare for the various sacraments (Baptism and First Communions). Having already given my catechists their exams, on Sunday 30 May I went to Igwe, the smallest village. Despite a straw chapel, and despite the limitations of the catechists, everything was ready. Christians cut the grass around the church and put a tarp on the roof of the chapel in case of rain. Above all, the 8 were ready, between boys and girls who received baptism, and the two children of first Communion. Great celebration, but above all so much joy for such a great gift, and for the blessing of being in the Church.

Monday morning I left for Bangui, where I returned from today, Thursday. There were many meetings, and a lot of work to prepare the construction site of the new Carmel convent. We had to set up the machinery that will allow us to manufacture, on site, the more than 200,000 bricks needed to build the convent. The bricks are a mixture of part of earth, part of sand and a little bit of cement, and pressed with special machinery. We are waiting for the cement, which should arrive by river, from the Congo. It will take more than 4,500 bags of cement for the bricks alone! 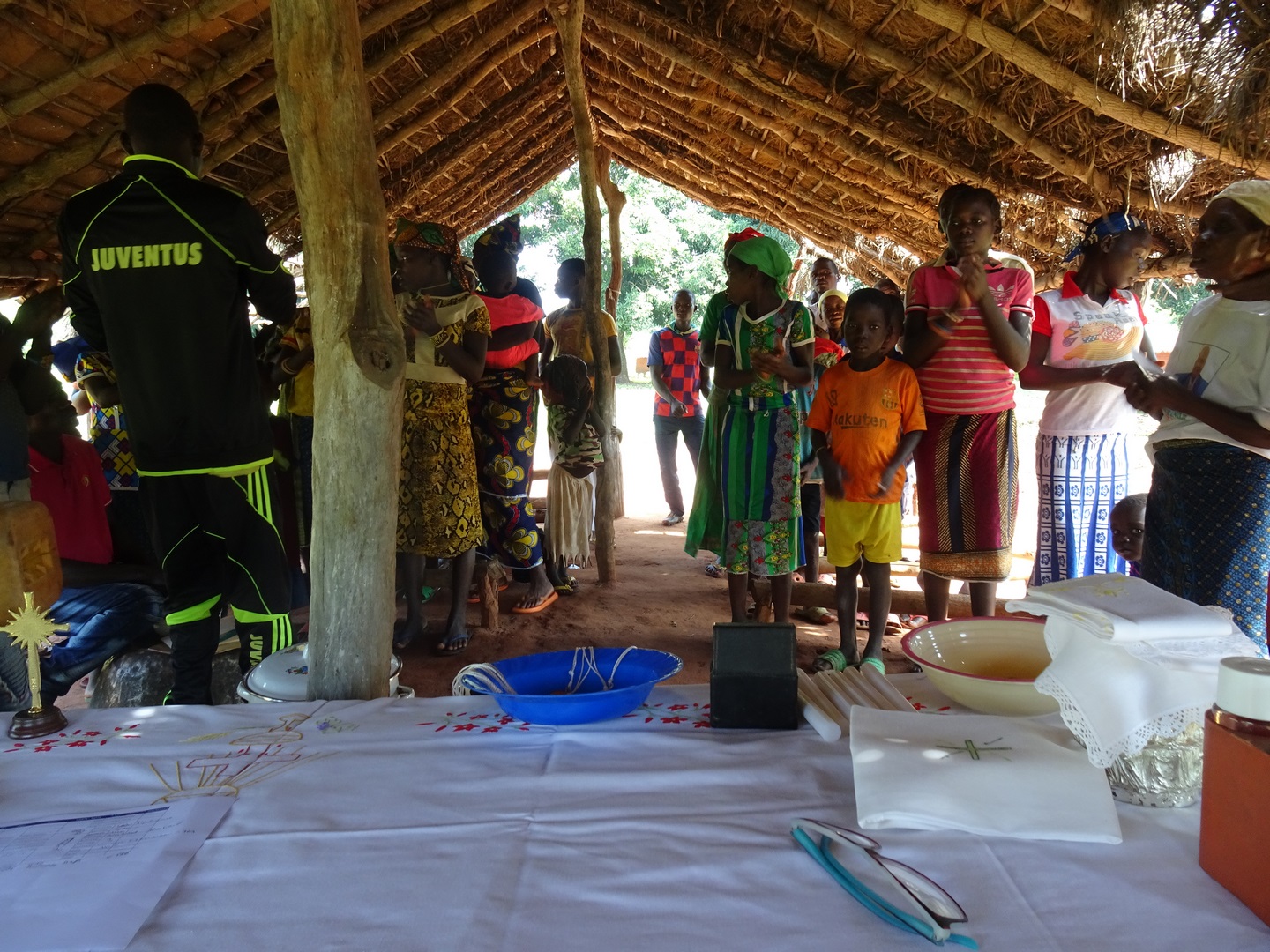 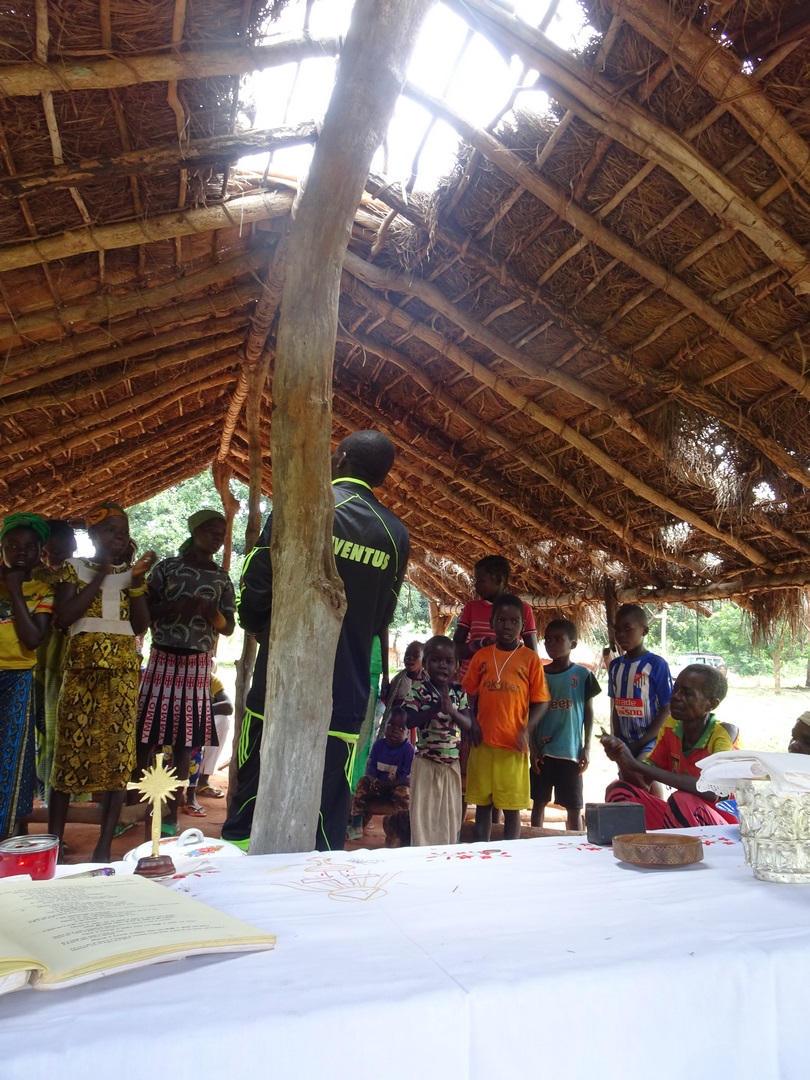 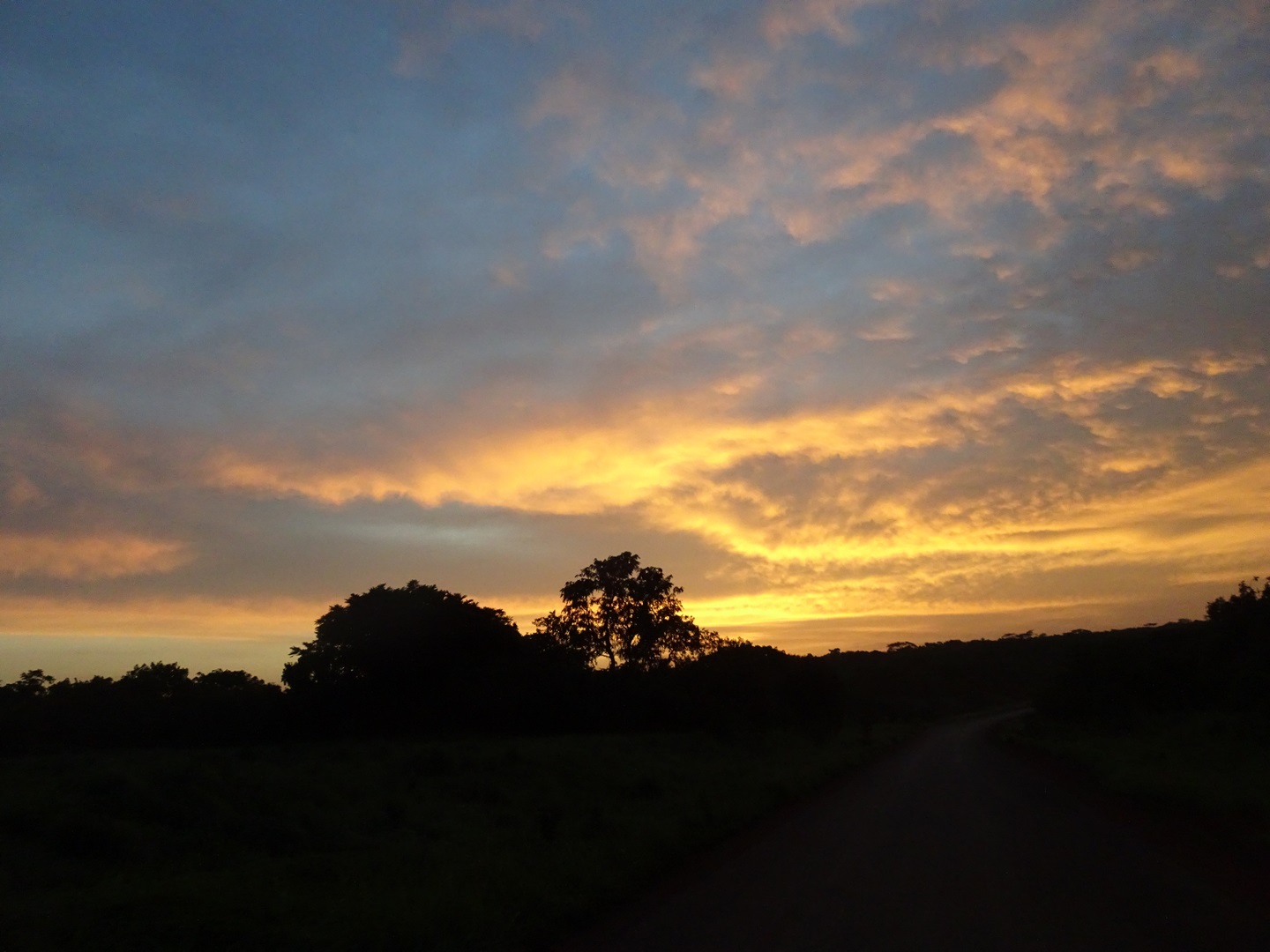 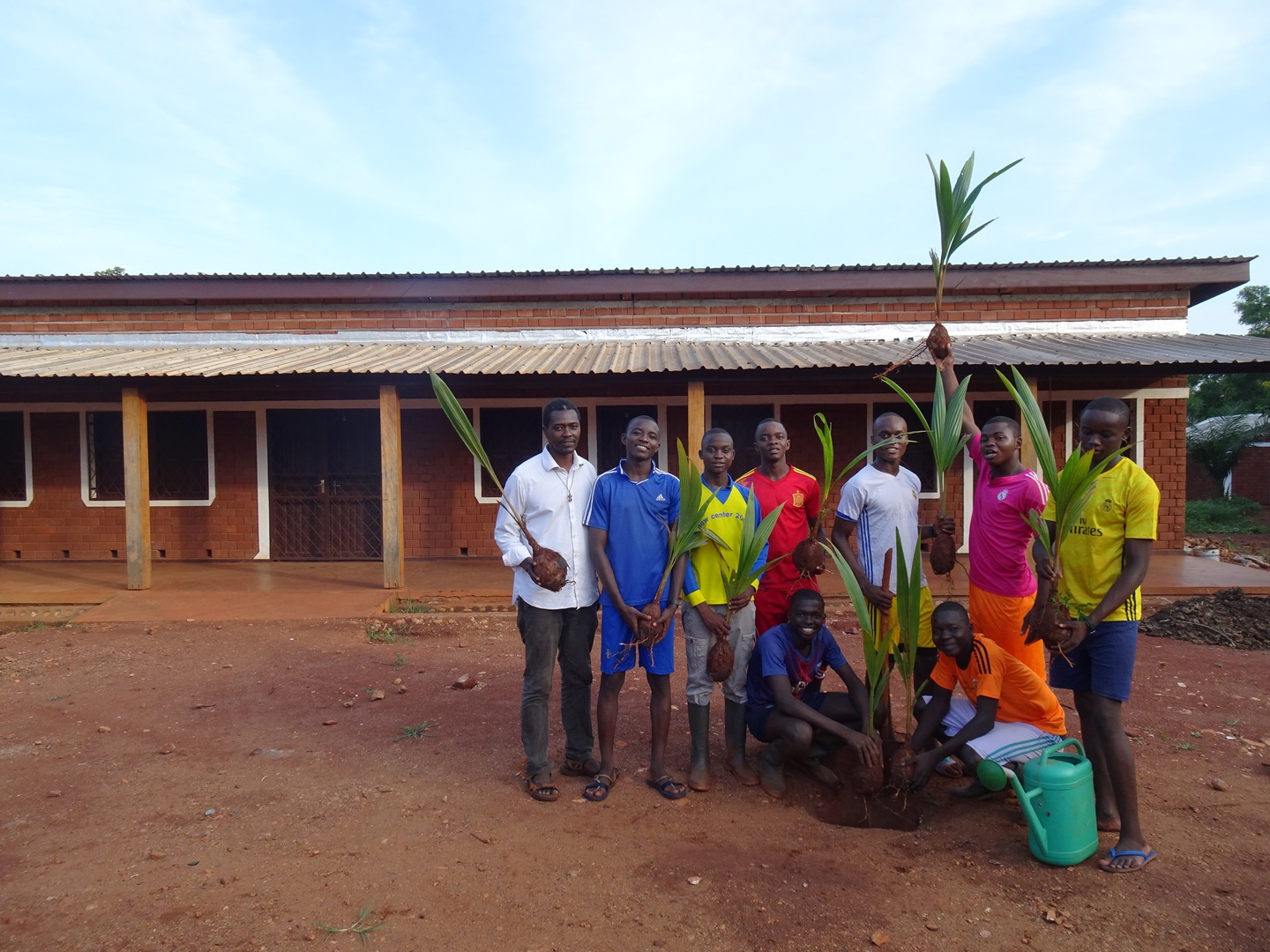 May, what a great month! 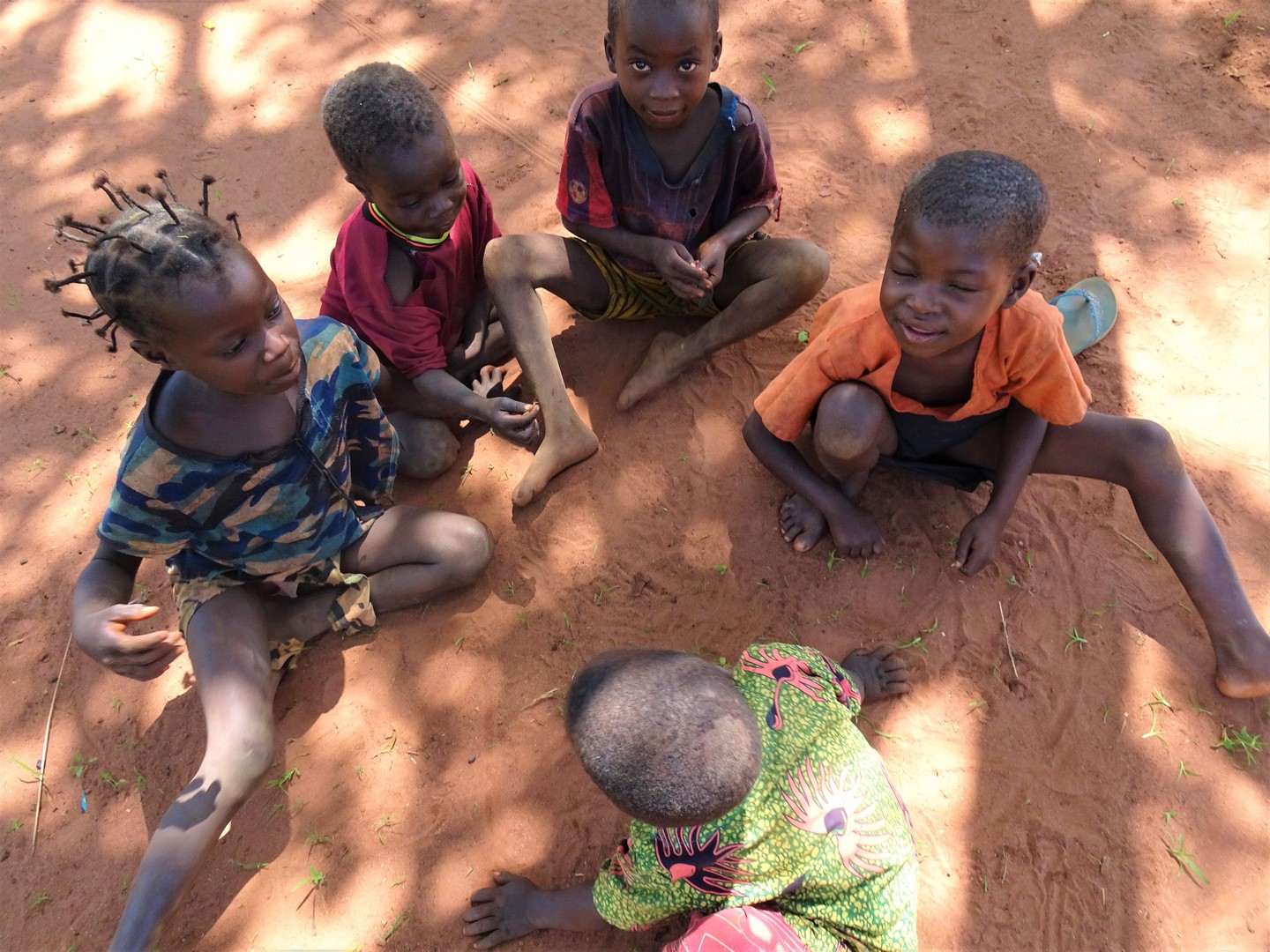 May, what a great month!

Here we are at the last week of the month of May.

A month in which we celebrated the Ascension of Jesus and the gift of the Holy Spirit, at Pentecost. Two great feasts that help us to remember how beautiful the Church is, that is filled with the Holy Spirit, who speaks the language of Jesus, which, beyond its structures, is made up of men and women loved by God.

I was thinking about this on Sunday, the feast of Pentecost, as I celebrated Mass in Balembe, a village where the Christian community is small and fragile.  The church is a canopy covered (at least in part!) with leaves, but where God's love has the same power as the great cathedrals. Where faith is the foundation of life, even if the church has no foundation! Where the simple liturgy, with the songs a little out of tune, are however "felt" by everyone: from the grandmother to the 5-month-old baby, who is already dancing to the rhythm of the drums (sometimes replaced by two empty tanks).

On Tuesday I quickly went to Bozoum, because the mother of a confrere, Fr Dieudonné, had passed away.
In the meantime, the end of the school year is coming near for our schools, including kindergarten and mechanical school.

May, what a great month! Today, 32 years ago, together with Fr Roberto Nava I became a priest. The very day of my birthday! 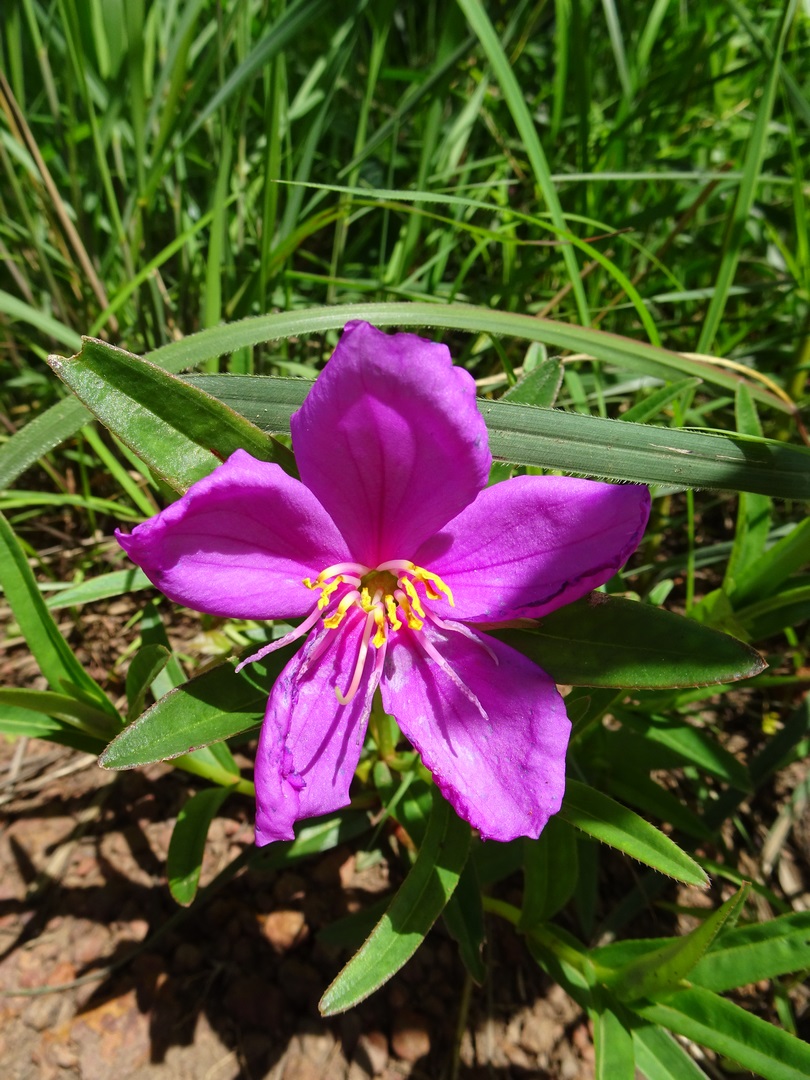 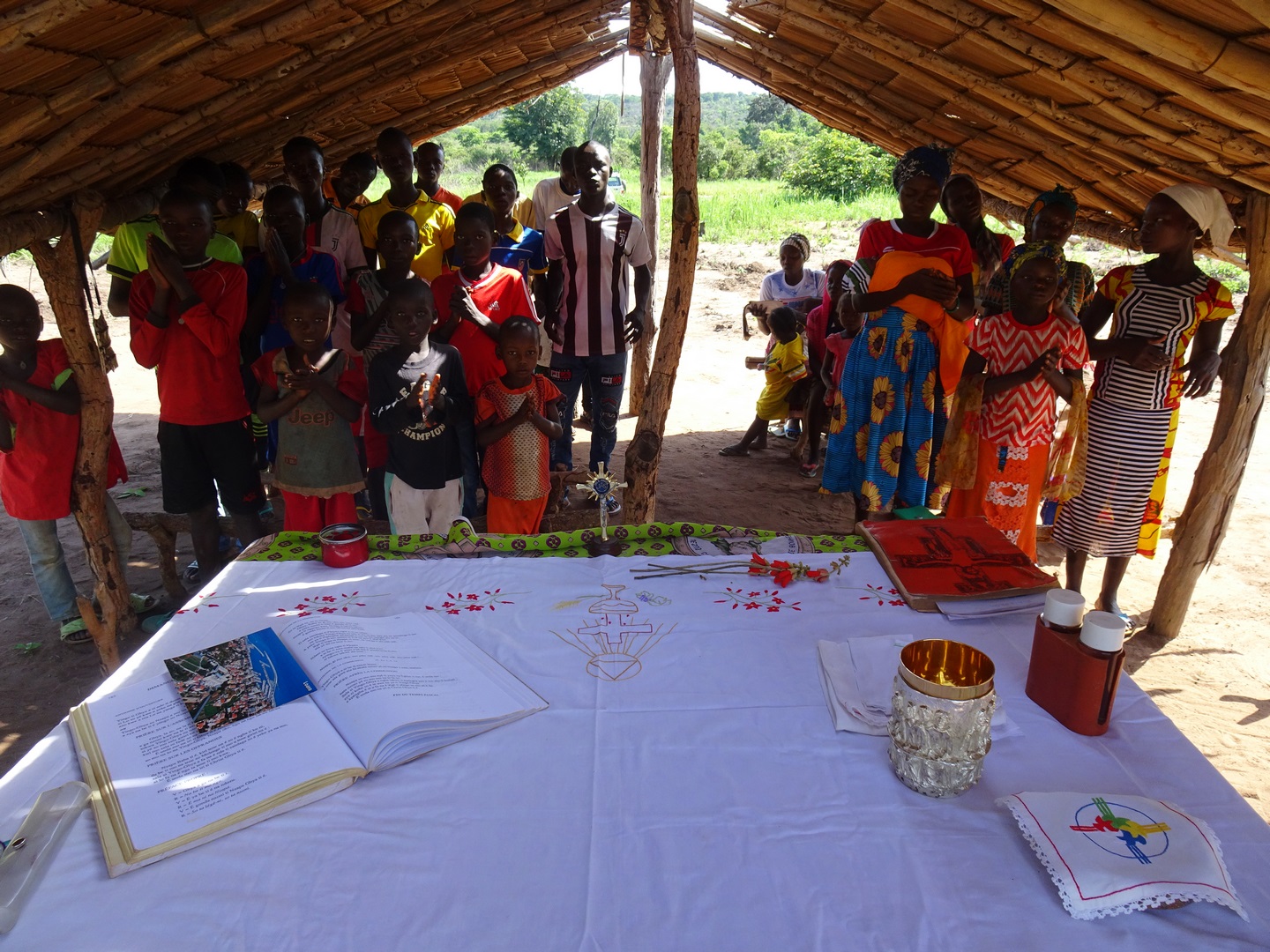 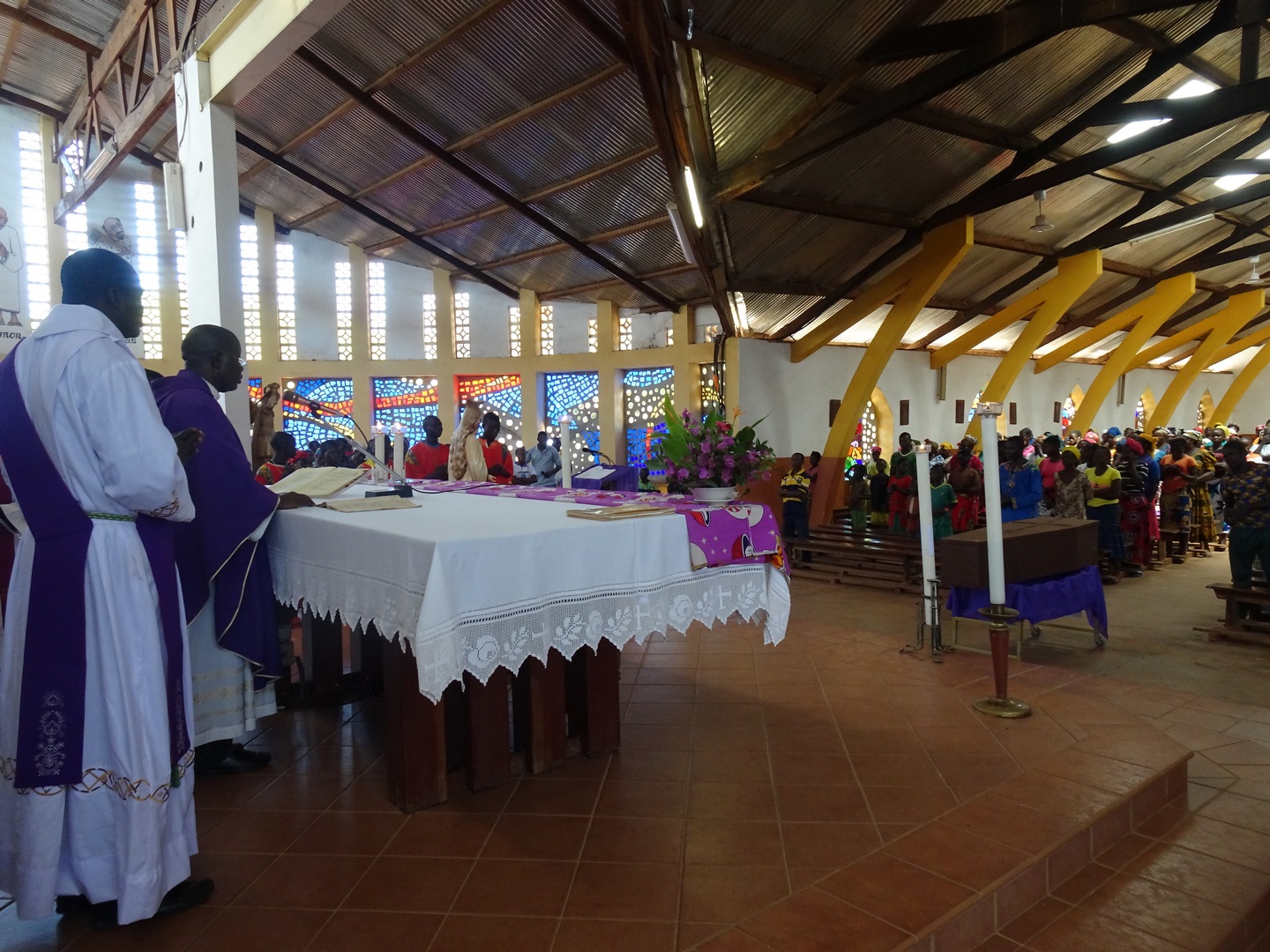 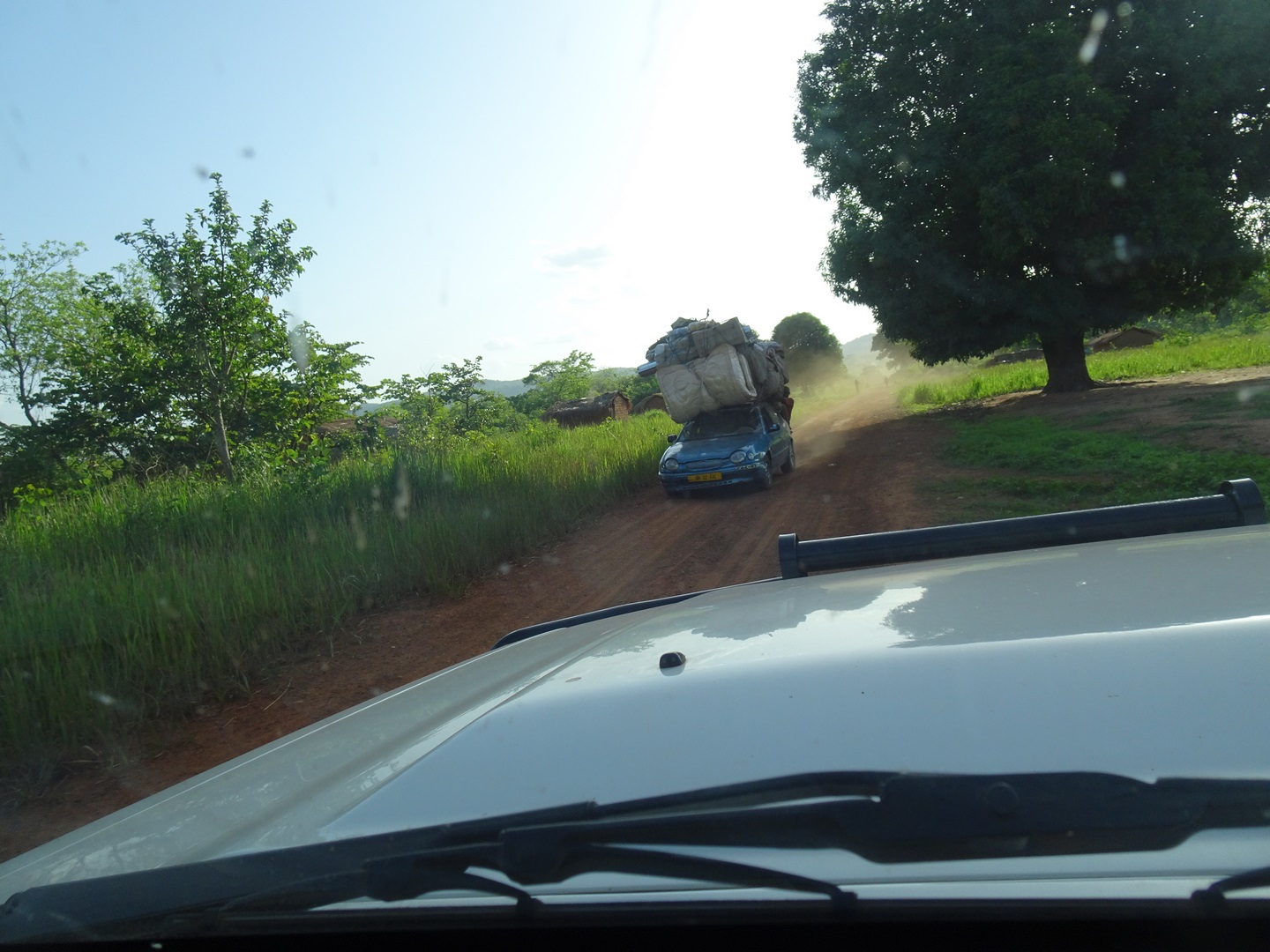 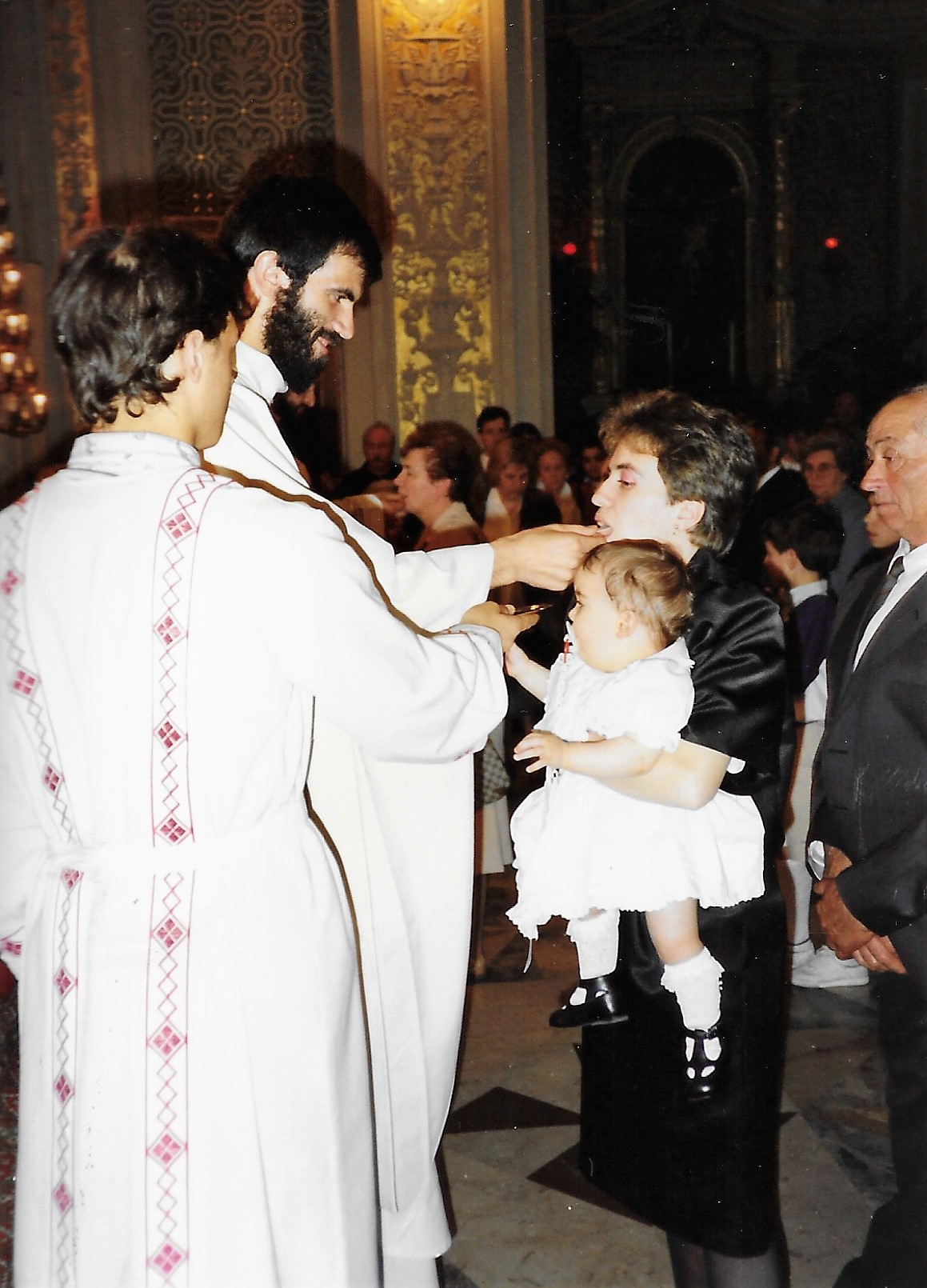 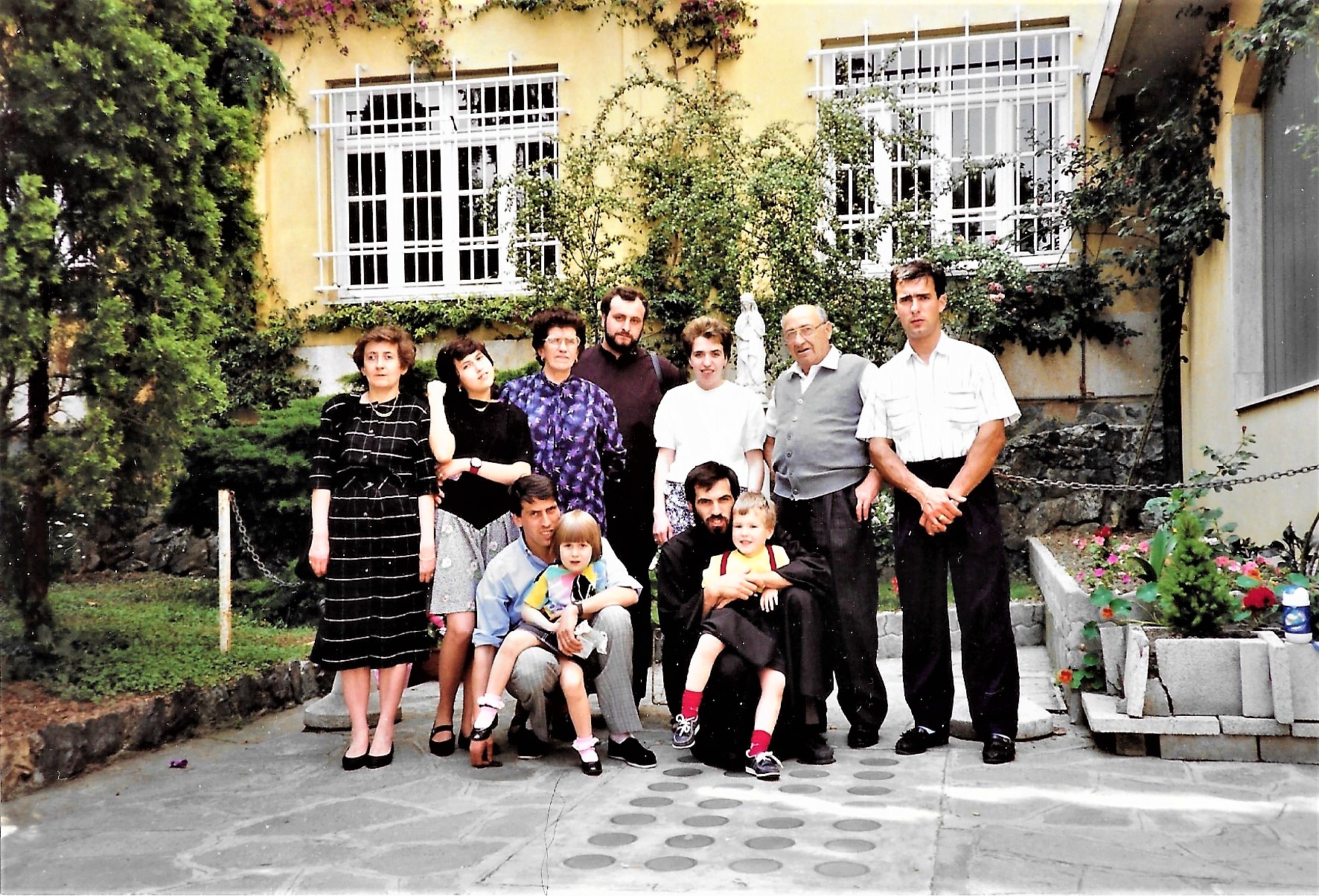 Land of man, land of God 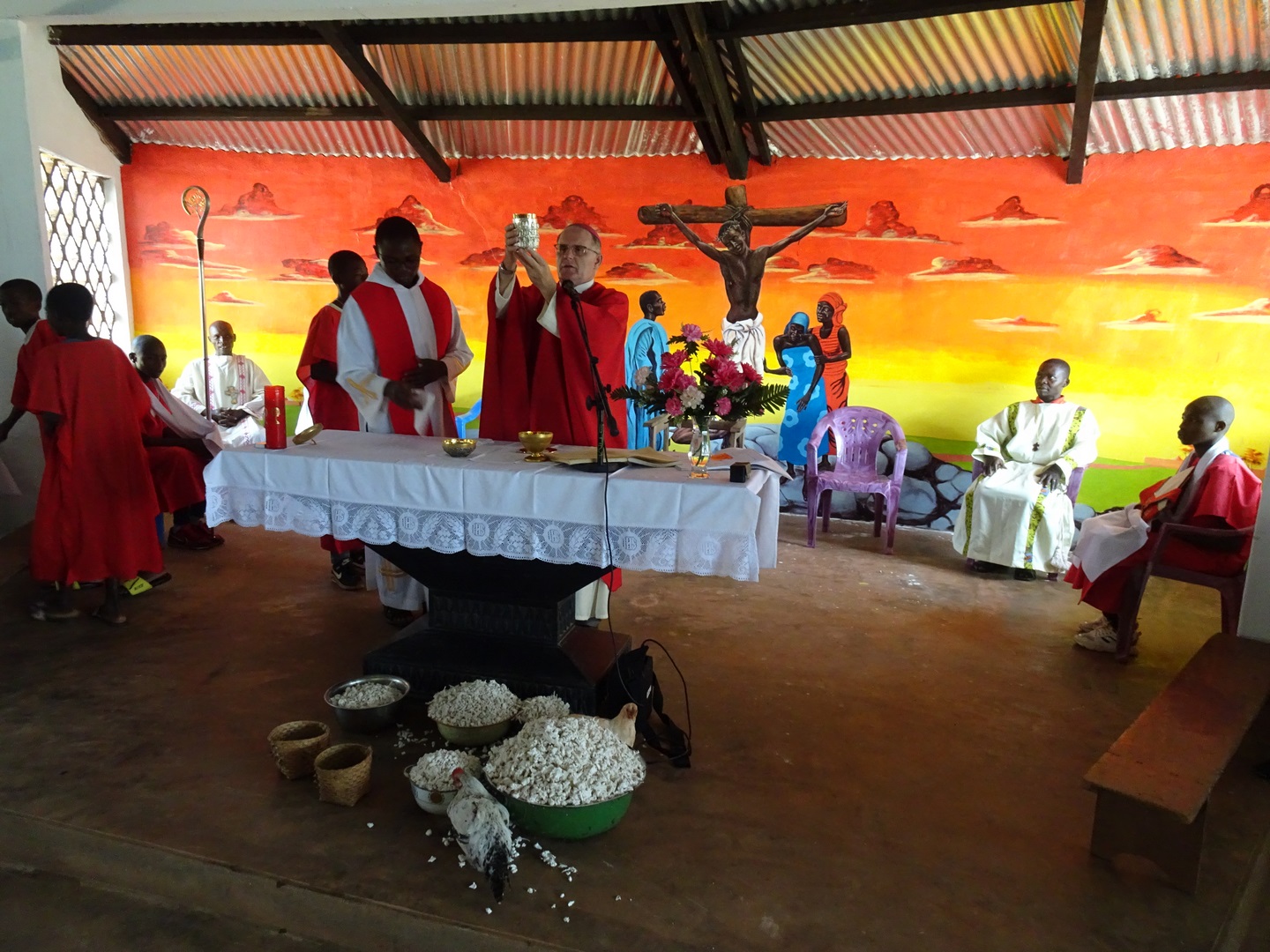 Land of man, land of God

All life, the entire world, is a parallel between good and evil, between life and death.

During the week I was able to relive this reality in a particular way: on Friday I was in Niem, a land of war and death, while between Saturday and Tuesday we celebrated  the sacrament of Confirmation, which is the irruption of the Holy Spirit into the world .

Friday 13 May I went to Niem. Here, a few days ago, the parish priest, Fr Arialdo, hit a mine with his car and the mine exploded. He and a passenger got out unscathed, but another passenger died.

The area is dangerous: the rebels have officially been ordered to leave by various troops (Russian, Rwandan and Central African), but yet they are still present in the territory. They are the ones who have planted mines on some roads. In the past few days there have been other similar incidents, as well as attacks on traders and people passing through.

The area is in need so, just like Caritas, we have decided to continue working here. On Friday I accompanied a dozen people, who for a few days dedicated themselves to meeting with families and helping those who are most in need.  This project is supported by CRS, one of the United States Caritas branches.

I met with Fr Arialdo.  He is 82 years old, and fifty of those years were spent in Thailand, the Ivory Coast and Central Africa.  Even though he is very strong, the hit from the road mine has caused setbacks for him, both physically and psychologically.

Between Saturday and Tuesday we made space for the Holy Spirit!

The bishop of Bouar, Mirek Gucwa, was with us for the sacrament of Confirmation. It is the gift of the Holy Spirit, who confirms Christians and makes them witnesses of Christ.

We organized 4 celebrations: on Saturday in Mbormo (on the road to Bossemptele) for the villages of Ngoumbou, Mbormo, Bawi, Barka Bongo, Zoungbe and Balembe. Sunday we were in Baoro. Monday in Pate Bonambolo (25 km on the Carnot road) and then to the villages of Samba Bougoulou, Pate and Bayanga Bode.

On Monday, after the confirmations in Pate, I left the bishop and with the carpenters went to the most distant villages. Around 2 pm I arrived in Bayanga Didi, about ninety km from Baoro. Here the candidates from the villages of Yoro and Sinaforo gathered. While the carpenters repaired the pews in the church, I completed the final exams and confessions.

Tuesday morning the bishop arrived around 8, and people welcomed him cheering.
Around 9.30 we began Mass, we had about seventy candidates, boys, girls, young people and adults, receive the sacrament of Confirmation. They were very intense celebrations, where we felt the presence of God and the power of the Holy Spirit abundantly.  I'm happy because, among the confirmed, there was Junior, a deaf child. What joy!

We finished around 12.30 ad it was time to say goodbye, load the car and then we left for Baoro.

The road was a path in the forest. Holes, stones, trees ... and even a fallen tree, which forced us to stop and cut it down in order to pass.

Around 4 pm we finally arrived in Baoro. 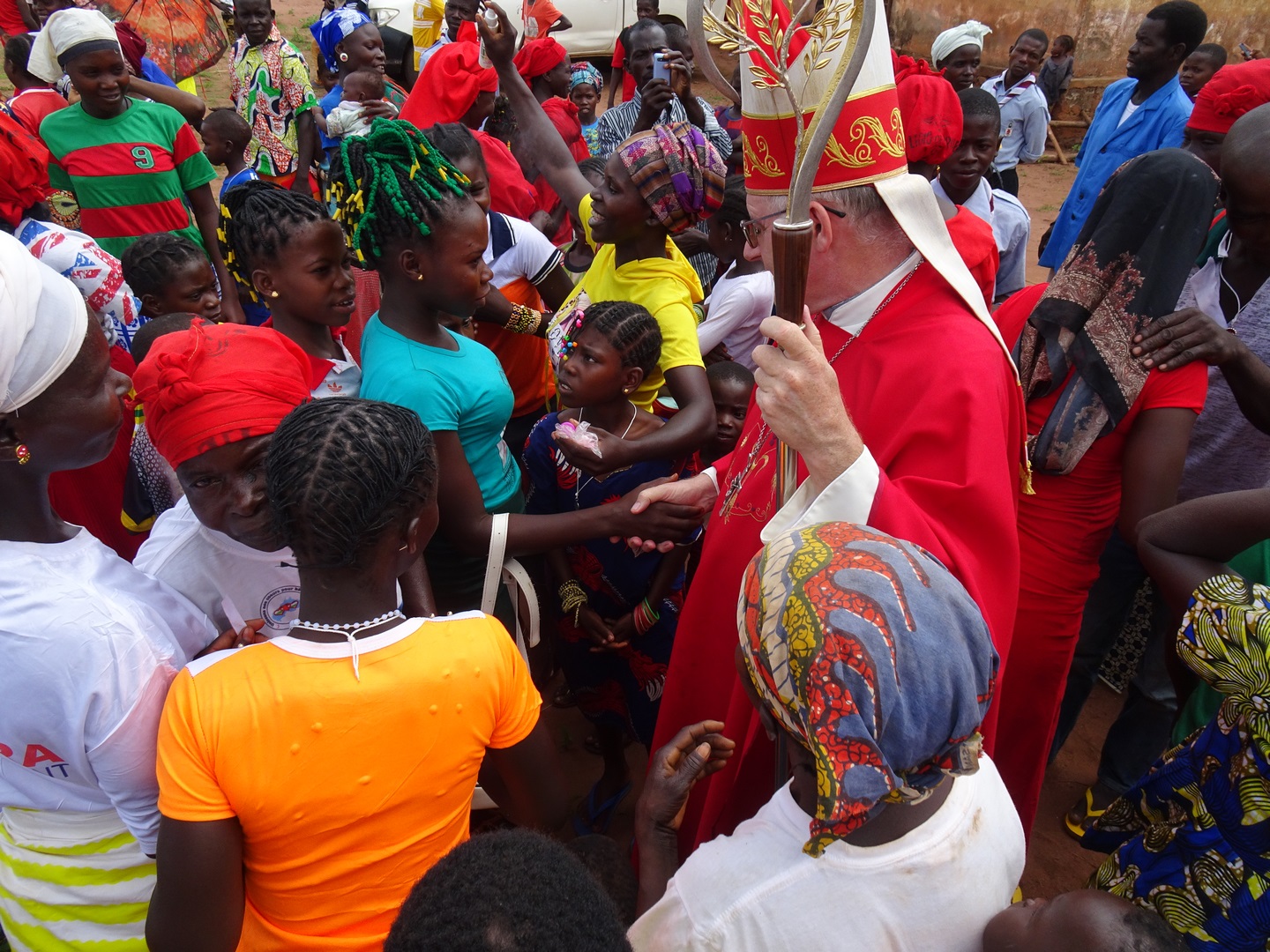 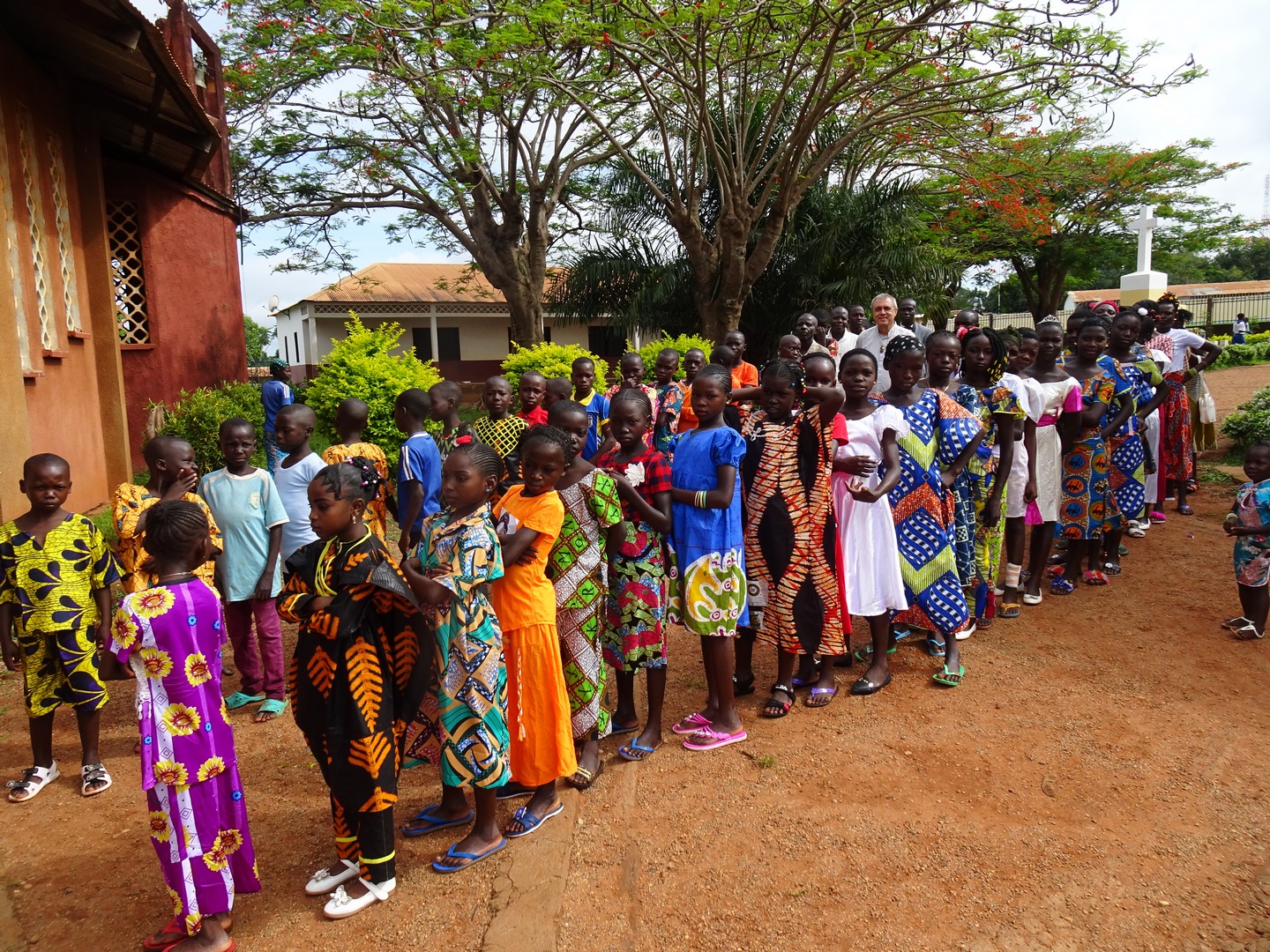 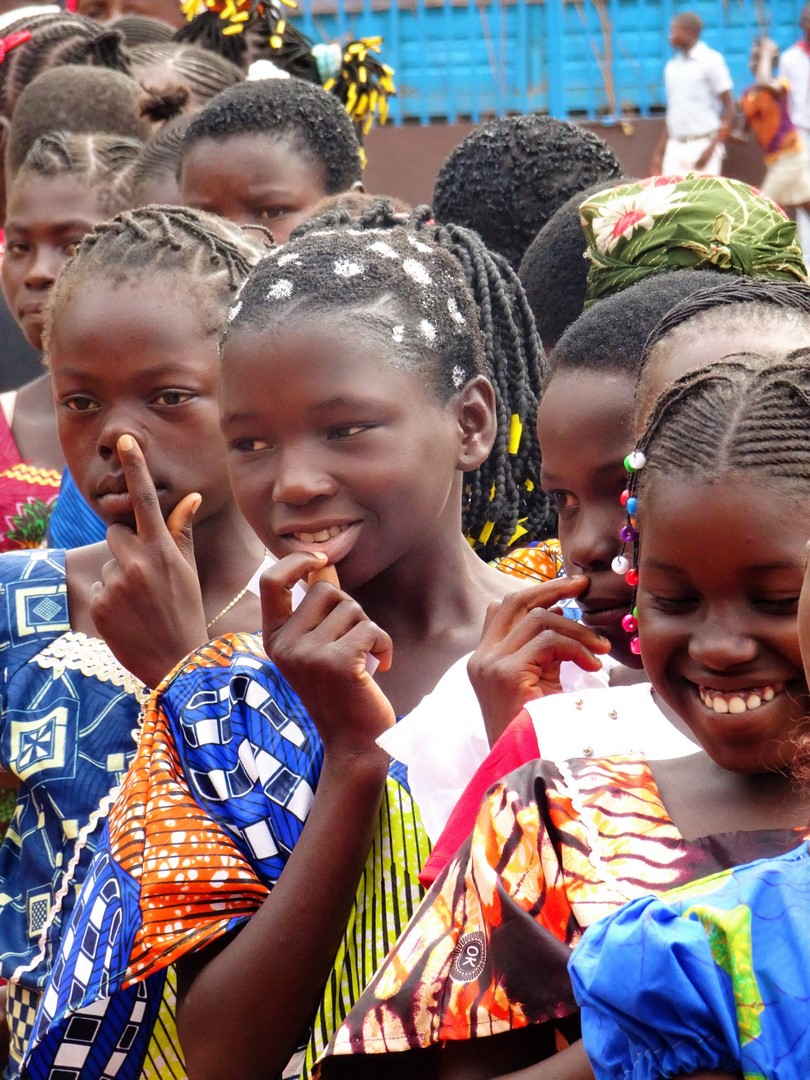 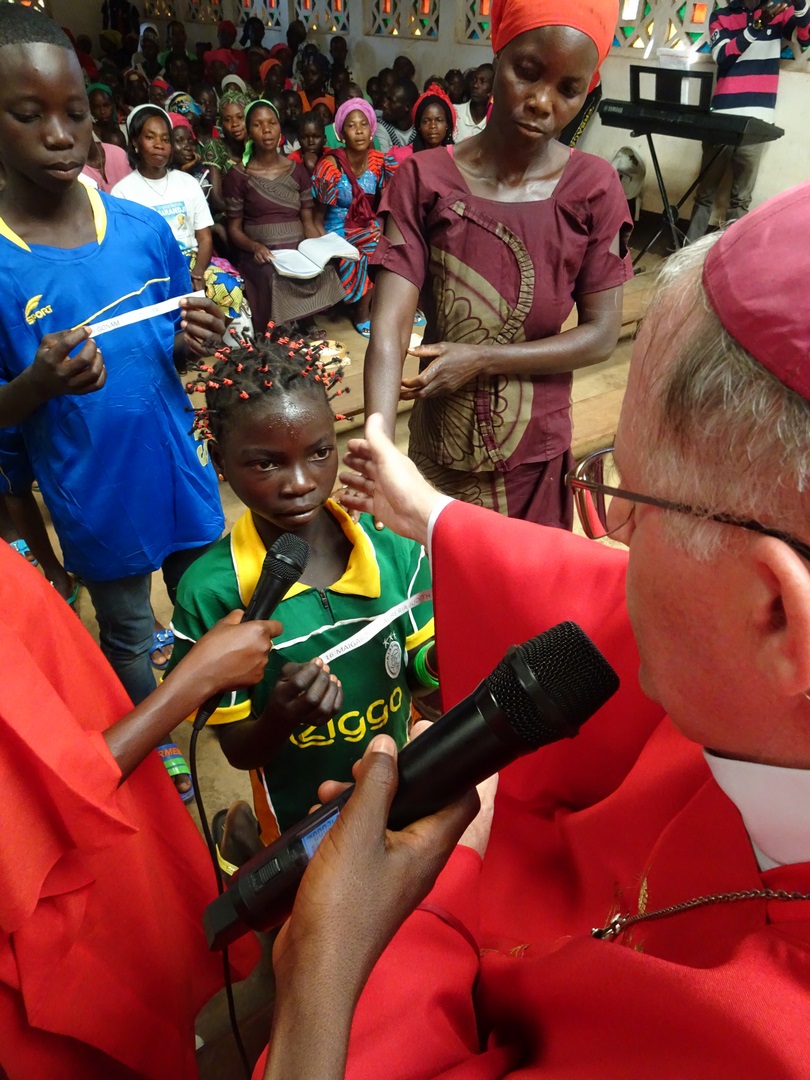 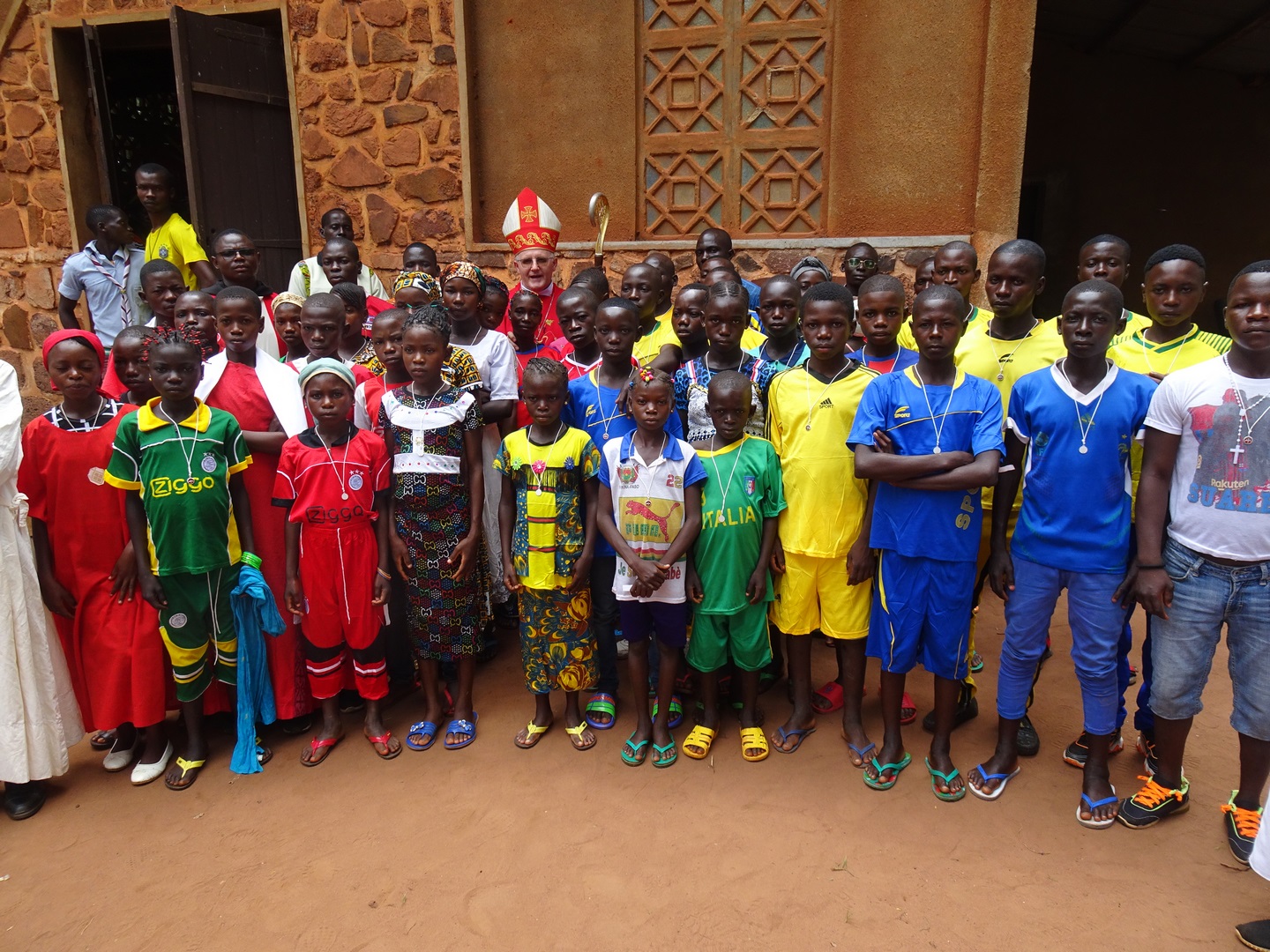 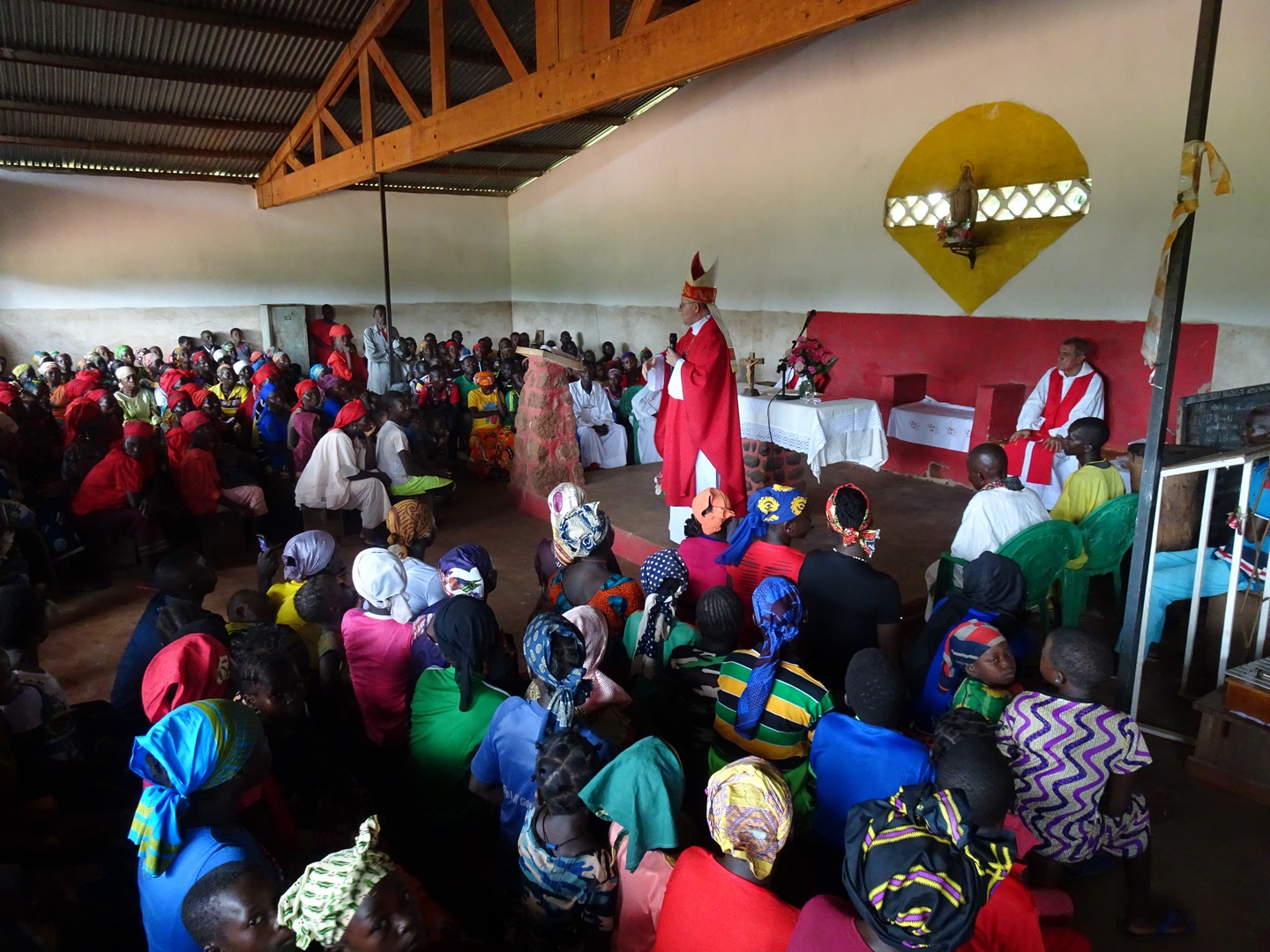 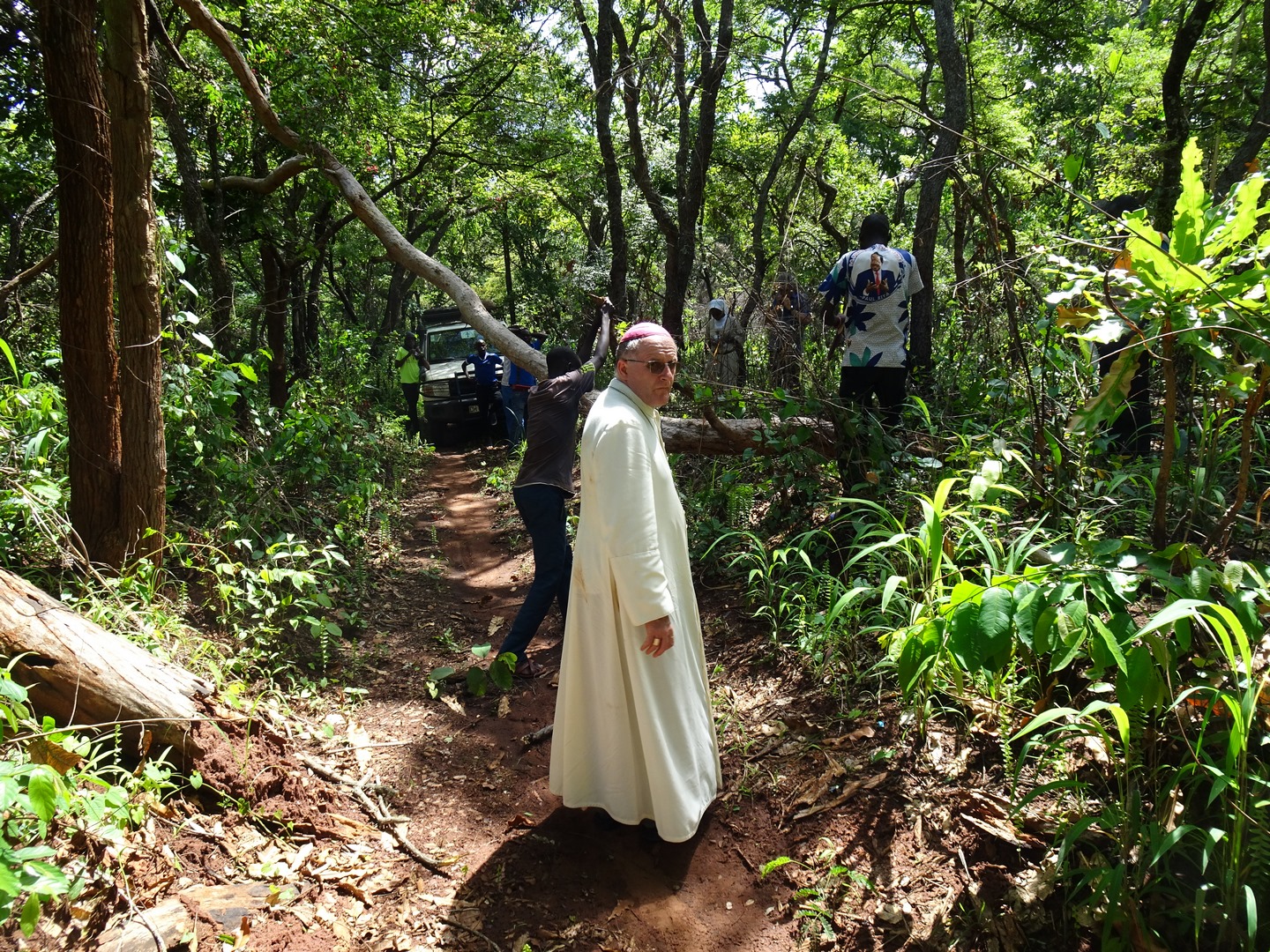 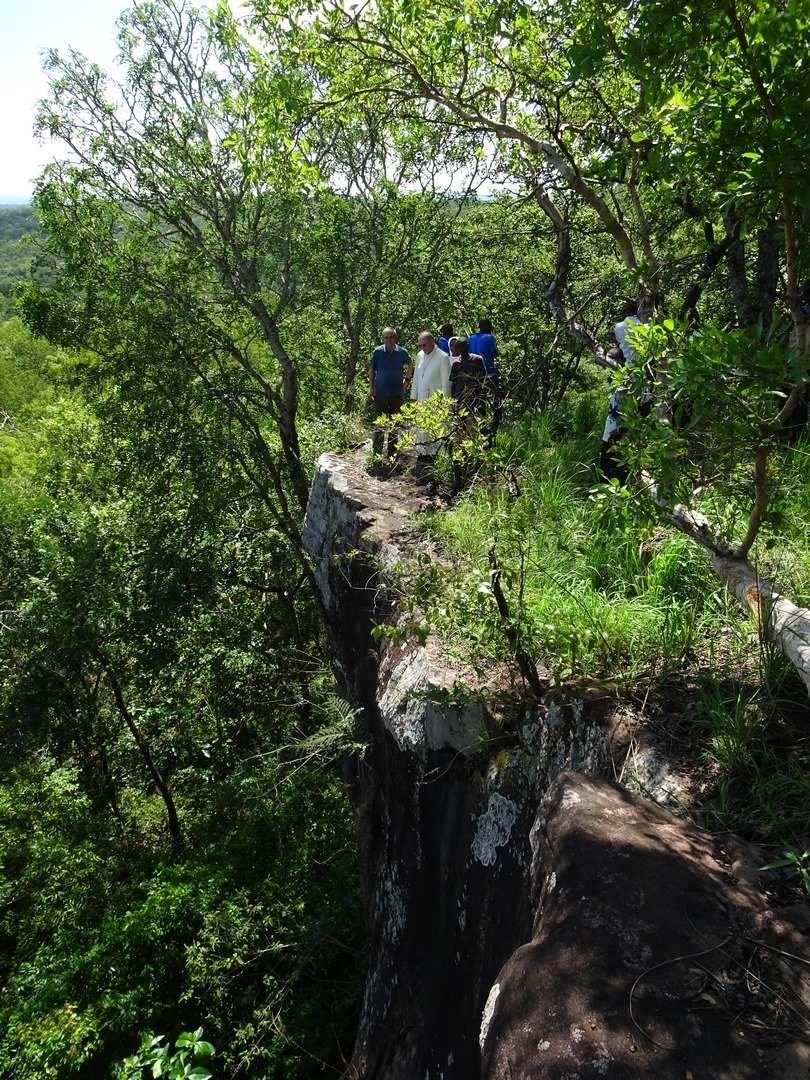 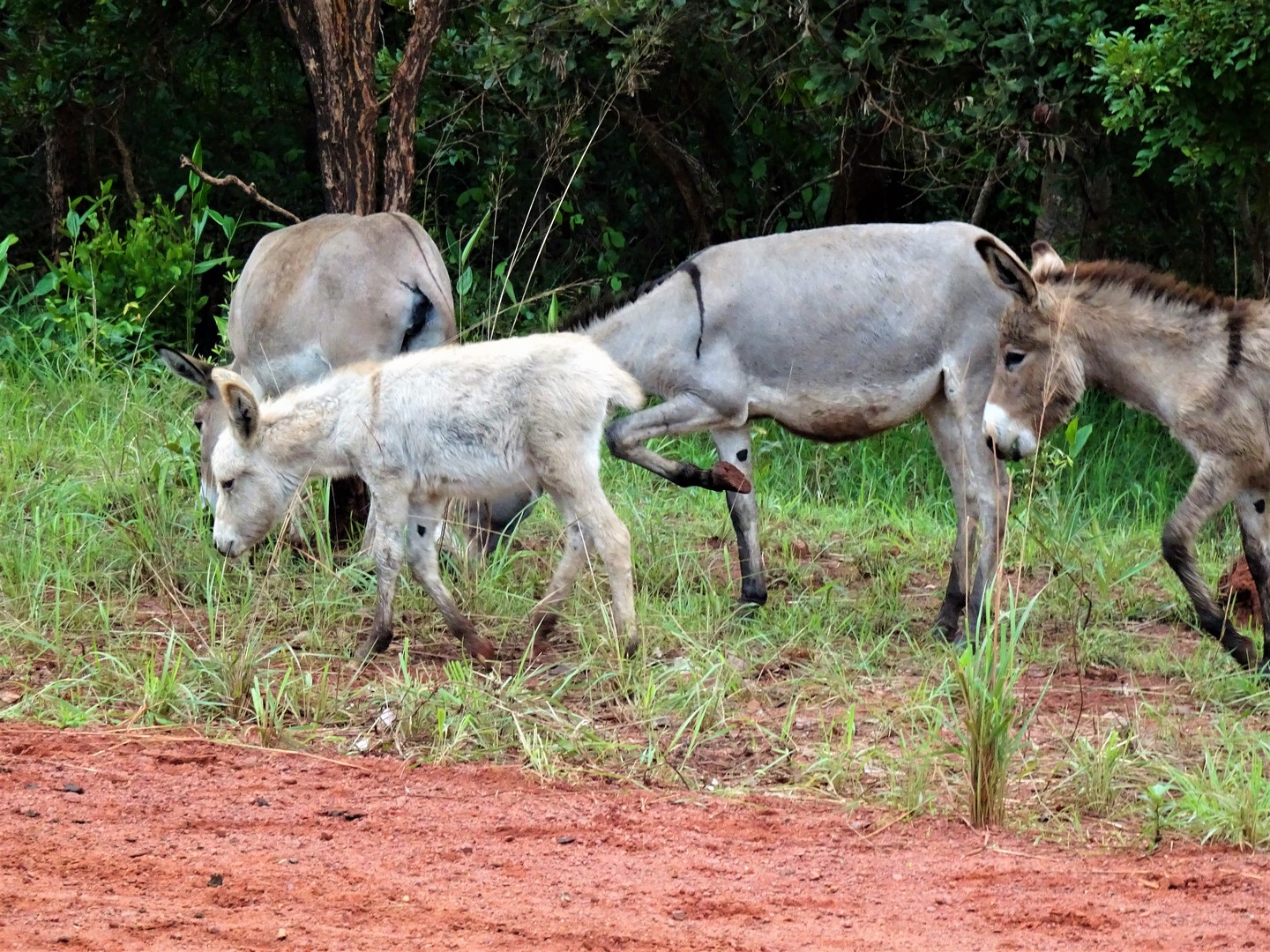 Traffic!
Every now and then I had hoped to get a little bored and not have anything to tell, but instead, every week, there is something new, interesting or original. Often, it is both interesting and original.
During this time we are preparing for Confirmations. The bishop of Bouar, Mgr. Mirek Gucwa, will be coming this weekend for this very reason.
To prepare for everything there is a lot of work. The catechists do their best to train the boys, girls, young people and adults.  Before the sacrament  it is necessary to verify how much the students have learned.
So, in these upcoming weeks, I went from from village to village to meet the confirmandi, help them prepare, and also do the catechism "exams": Saturday afternoon I dedicated to the nearest villages, that were on the road to Bangui, Sunday I was be in the village of Samba Bougoulou, and Tuesday and Wednesday the most distant villages (Yoro, Bayanga Didi and Sinaforo).
Tuesday morning I left before 6, and arrived in Bayanga Didi after 8.30. I brought with me a catechist, and 3 bricklayers, to redo the floor of the veranda of the church, that overtime (and because of goats!) has deteriorated. I alternated between the construction site and the exams, and in the evening we were well under way. I also had time to take a tour of the village. Here there was a small clinic, complete with a maternity ward. There was also a state school, where, unfortunately, the last lesson took place on April 20! Something really needs to be done about schools in this part of the country!
Wednesday morning, after having celebrated Mass at 6 am, I went to Yoro, 5 km away. Here I did the exams, and the preparation of the candidates. Just as I made confessions, they informed me that in Bayanga Didi they saw rebels of the 3R group (who a few days earlier stole some motorcycles and attacked some traders). After the confessions, we waited a bit, and since there were no unfamiliar sounds or shots, we left for Bayanga Didi, where we found a tranquil silence. Thank God it was a false alarm!
After the masons finished their work we were able to leave at 15.30.
We travelled in the rain, in the middle of the savannah and trees. The road hasn't improved: it takes almost 3 hours for 74 kilometers! Maybe it's because of the traffic… having encountered both a motorcycle and a car on the way...!
I arrived in Baoro in the dark, despite everything.
And despite everything, everything went well! 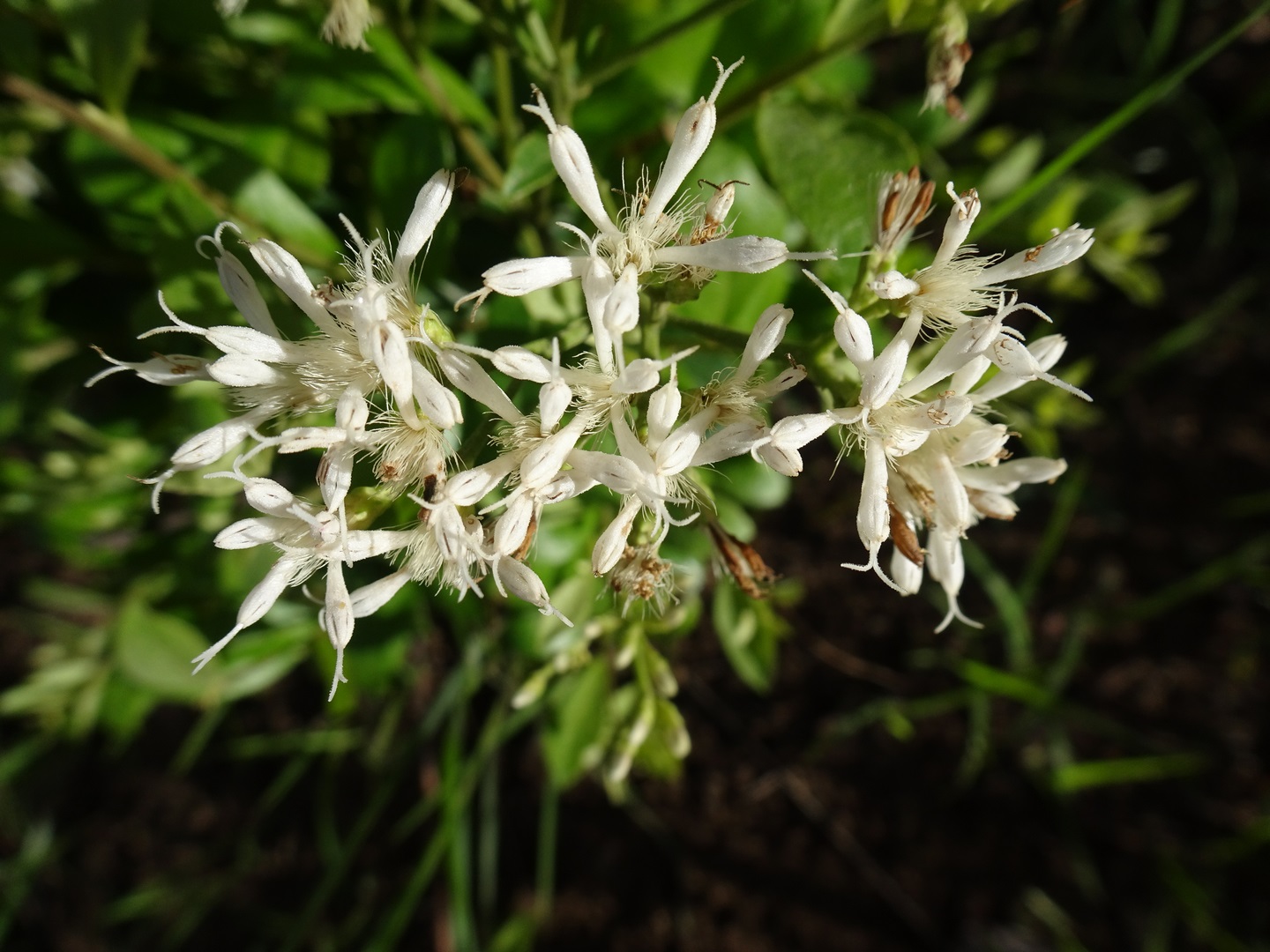 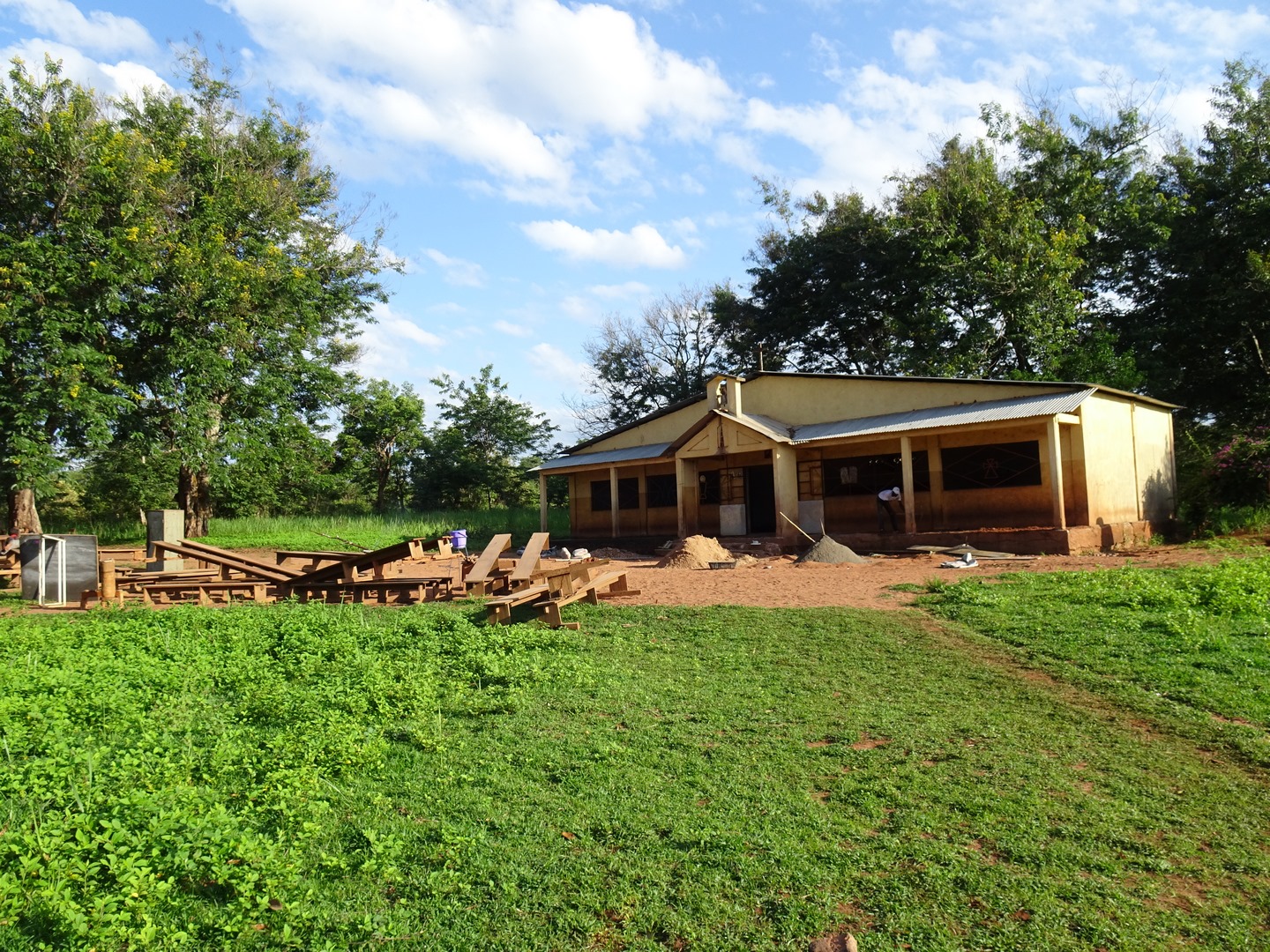 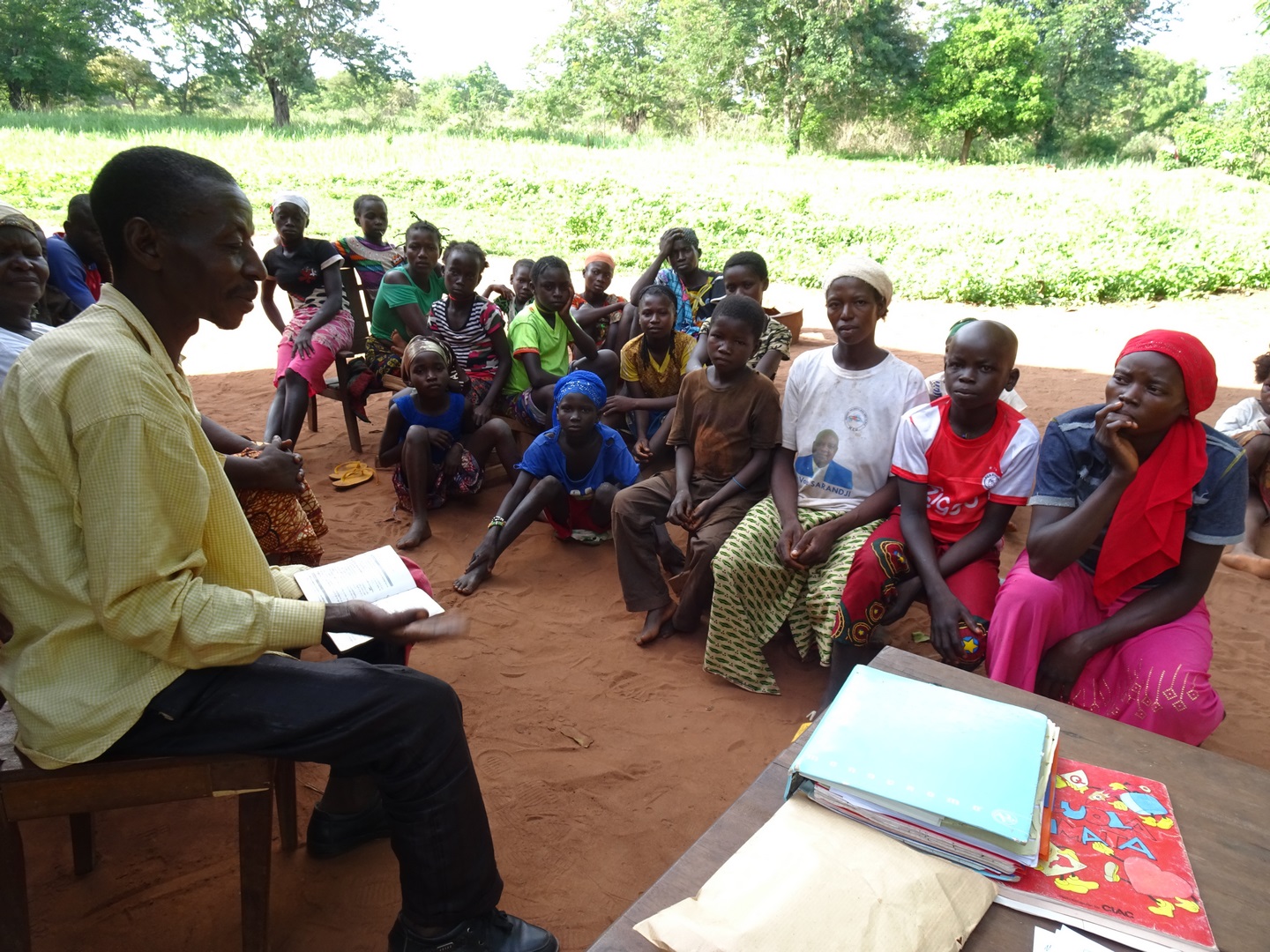 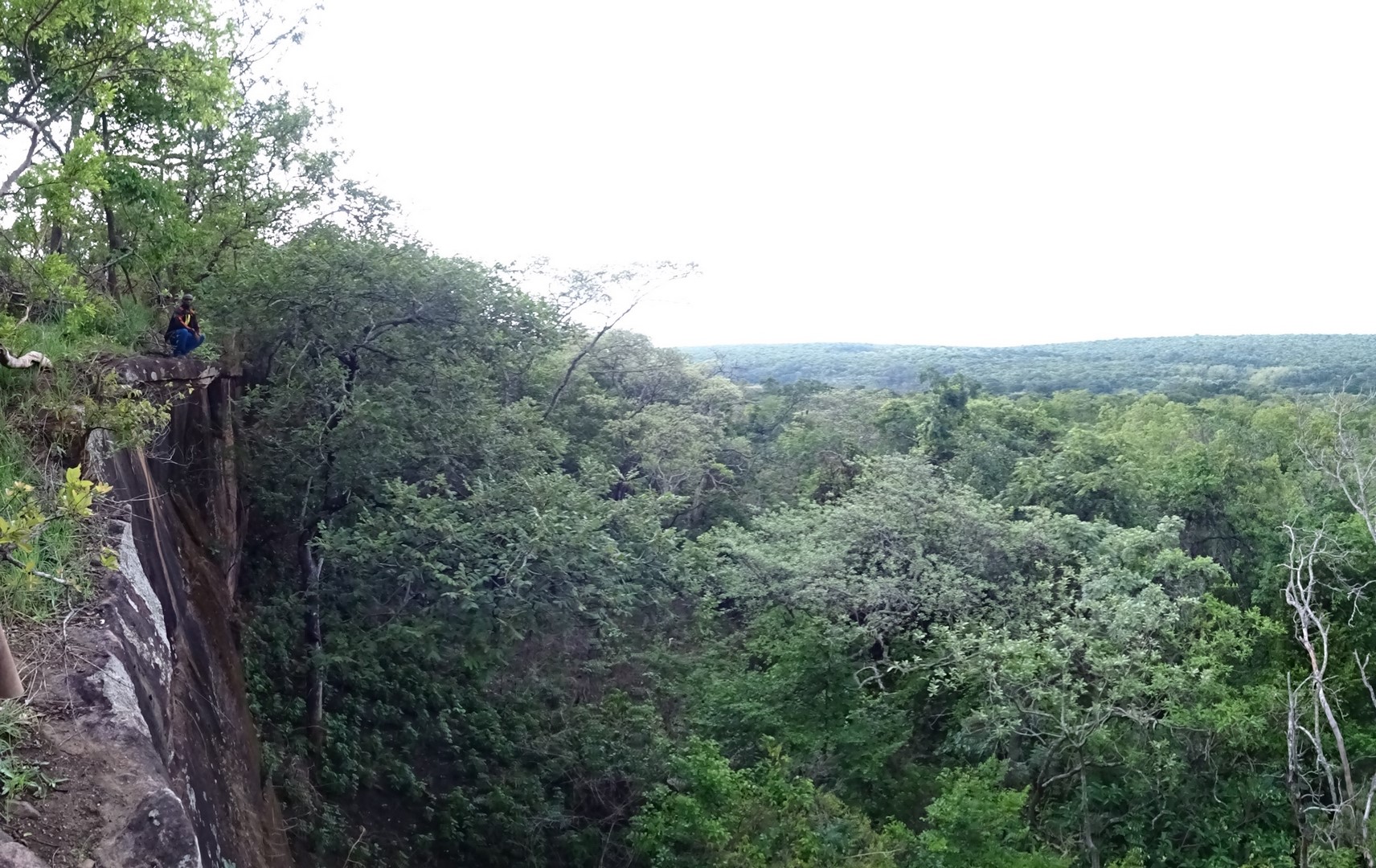 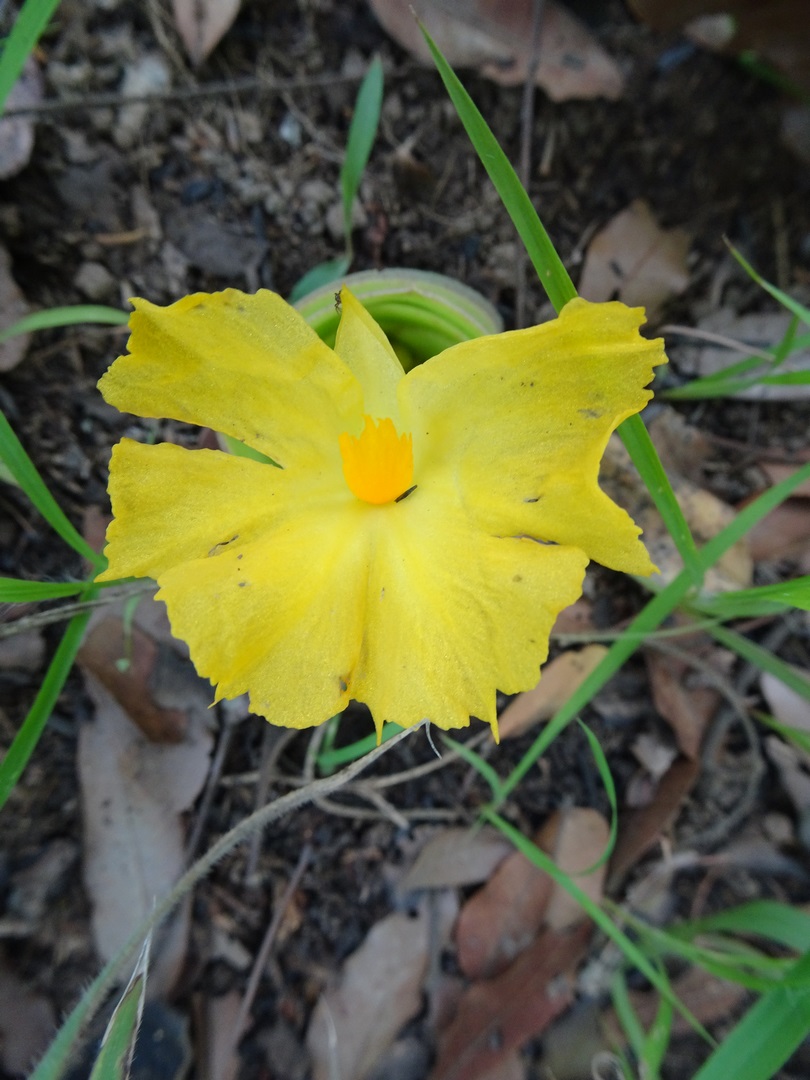 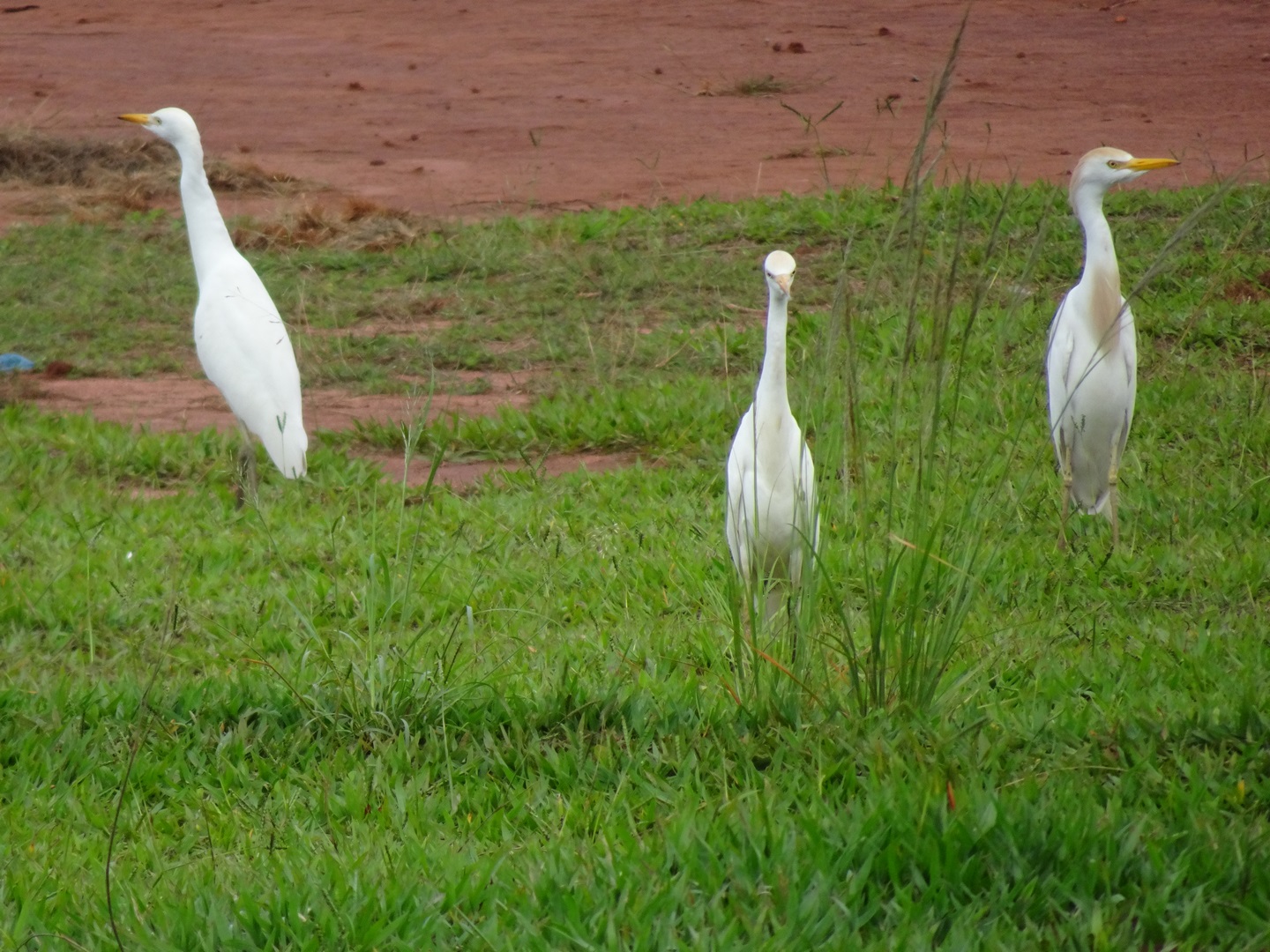 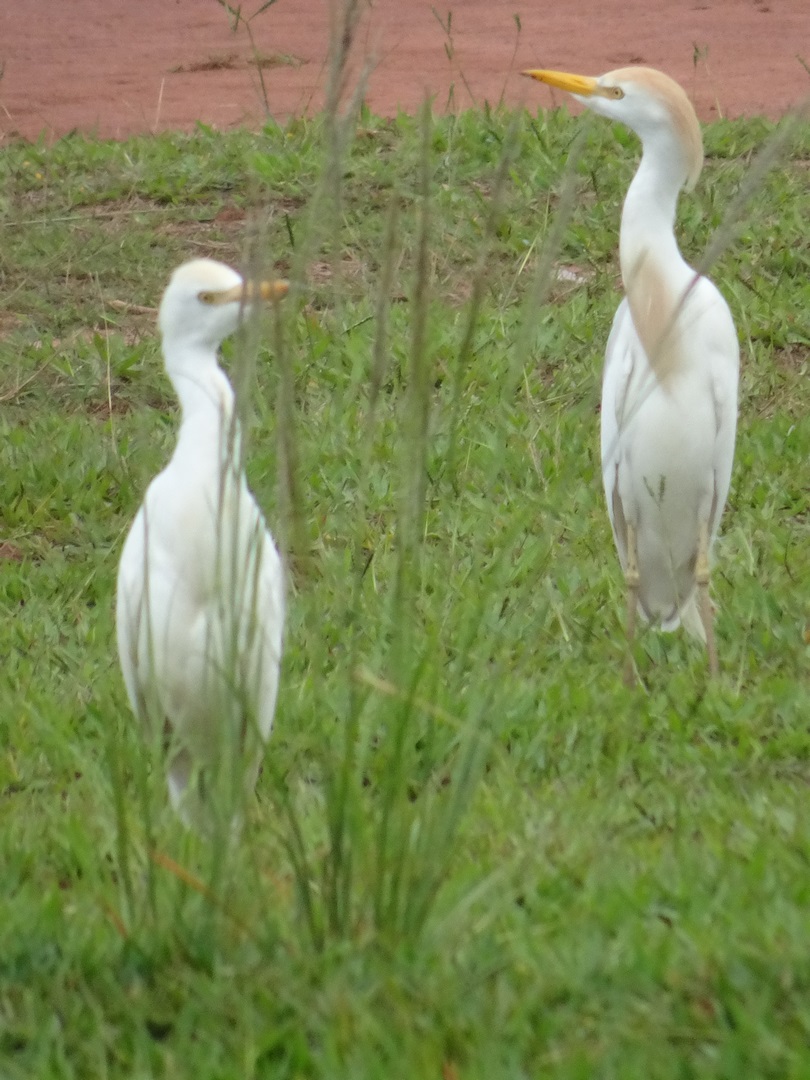 feed for this blog